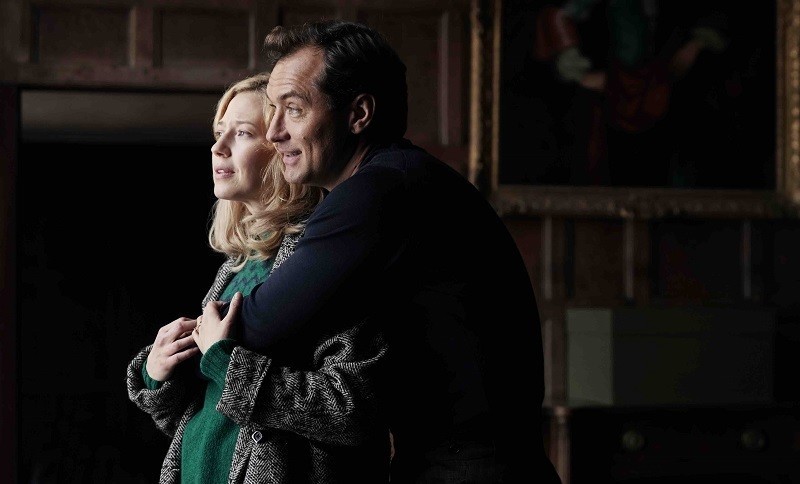 There are scenes in Sean Durkin’s marital drama “The Nest” that are so raw and real, so specific and vivid, you may feel the need to watch them through splayed fingers. As writer and director, he creates the sensation that you’ve wandered into an intimate space where you don’t belong, watching as a husband and wife tear each other apart with deep-seated resentments and hyperverbal jabs. It’s uncomfortable—but you can’t look away, because the dialogue is so riveting and the performances from Jude Law and Carrie Coon are so exquisite.

Nine years after his debut film “Martha Marcy May Marlene” (my pick for the best film of 2011), Durkin once again explores themes of seeking and striving, of reinventing yourself into an idealized persona with dangerous consequences. The cult that Law’s Rory O’Hara has joined is capitalism, but given that it’s the conspicuous consumption era of Reagan and Thatcher, his yearnings are inevitable. Durkin never spells out that notion, though. Rather, it’s part of the rich atmosphere he creates, as Rory, Coon’s Allison and their two kids relocate from upstate New York to England in pursuit of elusive riches. Rory already lives like he’s made it big, but he’s hustling and schmoozing, relying on his looks and charm to get him in the door at prestigious investment firms, and it’s clear that the tightrope he’s walking will snap beneath his feet at any moment. While he insists on moving his family into a sprawling manor they can’t afford, a building sense of claustrophobia is inescapable.

Within this slow burn, Law and Coon give career-best performances. This is the role Law has been working toward his whole life, playing on both his golden-boy beauty and sinister charisma. And Coon is just a knockout as Law’s fed-up wife. She has a chameleon-like quality as an actress, but no matter the role, she exudes a bracing directness. She always gives you an authentic truth. And when she finally snaps, she’s ferocious.

“The Nest” evokes its 1980s setting in inspired ways, from unexpected wardrobe and production design choices to a varied soundtrack of hits ranging from The Cure to Bronski Beat to Al Jarreau. But while the period details are specific, the story of desire and deceit is timeless. (Christy Lemire)

Tagged with: The Nest